A lifetime ago, before kids, The Hubby and I used to spend a portion of our free time browsing antique shops. It's amazing how much free time you have BEFORE you have kids.

At first he wasn't really into antiquing with me.  He tolerated it because I enjoyed it.  That changed when he discovered there is a whole world of political and social historical paraphernalia out there! I think we were in Washington DC when he found his first vintage political campaign pin.  It was a purple volunteer ribbon for the Nixon campaign.  Since then he's been more than willing to venture into over-cluttered, musty smelling, time capsules called antique stores.

Before we had kids we'd wander into antique stores and follow our noses.  One trip I discovered two vintage mid-century peacock wall hangings.  I. Loved. Them.  He however, did not.  He rolled his eyes when I pointed them out to him.  But, since we were moving soon for graduate school, and I was having a baby in a few weeks, we (well, really he) figured maybe we should save the money for something more important, like, say, diapers.

For three months I pined over these two wall hangings.

Finally, after having a new baby, visiting family out of state, packing our stuff and putting it in storage, I talked The Hubby into going back to that antique store to see if those two ah-mazing peacocks were still there.

Someone else had seen the glory of these two mid-century beauties.  I should have gotten them when I first saw them.

Since then, I see peacock stuff EVERYWHERE.  I never noticed it before.

While in Hobby Lobby a few weeks ago, I discovered these little darlings.... 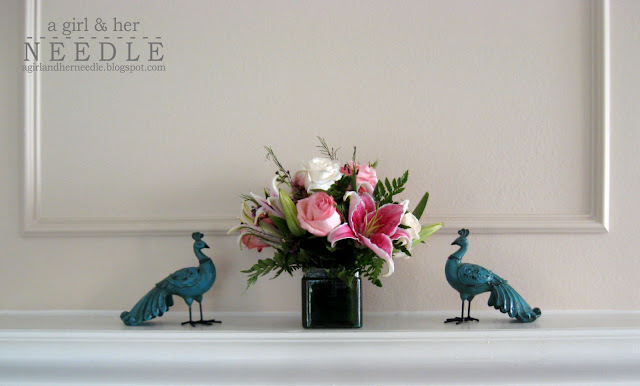 And, I purchased them. 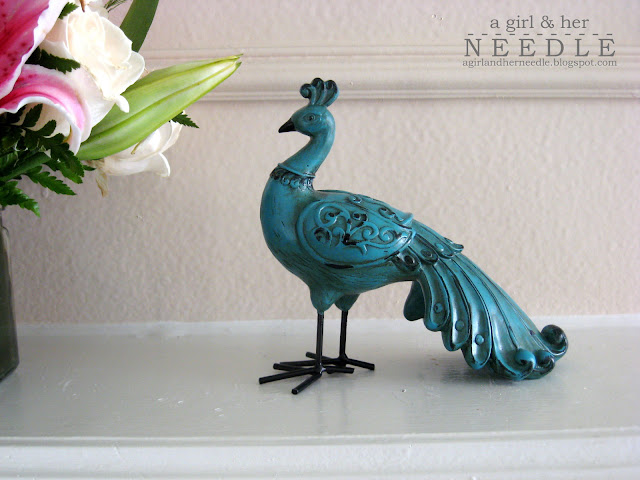 The Hubby didn't even roll his eyes this time.  He just laughed.  He knew.  He even said "they're cute" which basically means he's totally indifferent to them and really has no opinion other than to make me happy.

I'm not gonna lie, every time I walk into an antique store, a little part of me hopes those peacocks are hanging somewhere, just waiting for me to take them home. Maybe next time.

I will wish those peacocks will be waiting somewhere for you! Let me know if you ever find them!

Hey! I wrote another post today and mentioned you in my blog, if you want to read what I had to write about Sept. 11, 2001 and "the little church that stood". Have you been back to NYC and seen St. Paul's?

Lol! Thanks Kay! Something tells me that if I did ever run into them again, they probably wouldn't be able to live up the the "hype" I've generated in my mind!